AICA 2017 Second Place Winner in the Small Monuments category, this memorial monument was designed by Cal Christensen. Aden was two years old when he received a John Deere electric ‘’Gator’’ tractor and from that day forward, there wasn’t a day that went by where he couldn’t be found driving it around the family farm. Naturally, that image had to be included on his memorial, so we dedicated the back of the monument to include a portrait of Aden in his John Deere, traveling down from a pair of barn doors, toward the viewer. Aden’s portrait perfectly captures the “brightness” of his personality. Because the granite itself is green, we were able to utilize the polish to emulate the trademark green of the John Deere.  Because of the importance of the imagery on the back, the front was left simple and elegant with name, dates, and a bronze flame accented by the alcove. The flame itself is representative of the light of Aden’s spirit that will always shine as echoed in the epitaph on the back and tying the two sides together. 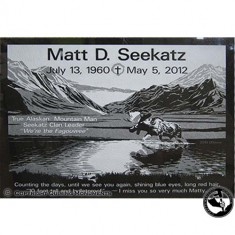 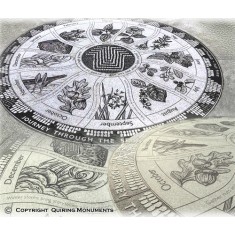 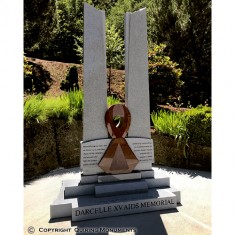 Find inspiration for an epitaph. Epitaphs for

Dad's motto, "The devil made me do it", we loved him anyway.

So many men, so little time!

So many women, so little time!

Don't tell me where to park.

The shell is here but the nut is gone.

She walked in beauty.

Of generous heart…and of beautiful spirit

As always, right beside my cowboy.

The saddened hearts were healed, in knowing the pain of life is over and the beauty of the soul revealed.

Nothing can ever take away the love a heart holds dear.

The hours part us, but they bring us together again.

Hopeful hearts will find forever roses underneath the snow.

Till we shall meet and never part.

There is a garden in her face where the roses and lilacs blow.

Love you to the stars!

We meet each day in our garden of memories.

It's not where you go in life, it's who you have beside you.

Just whisper my name in your heart and I will be there.

Tears are often a telescope by which men see far into heaven.

A life of beauty and service.

He saw beauty and painted it with a master's hand.

Lord, thank you for a beautiful life.

It broke our hearts to lose you, but you didn't go alone for part of us went with you the day God called you home.

Death is a golden key that opens the palace of eternity.

The Cross leads generations on.

A day of duty done, a day of rest begun!

I have fought a good fight, I have finished my course, I have kept the faith.

Bone of my bones.

An angel visited the green earth, and took a flower away.

My dear, be still and slumber; jolly angels guard your bed.

Our little me has gone home to be an angel, a chosen bud in the Master's bouquet.

Death is not a foe, but an inevitable adventure!

Here lies an atheist. All dressed up and no place to go.

The record shows I took the blows, I faced it all and I stood tall, I did it my way!

Life is too short not to have a little umbrella in your drink!

"Don’t cry because it's over, smile because it happened."  - Dr. Seuss

She made our nest the best!

Glad you stopped by.

What you leave behind is not what is engraved in stone monuments, but what is woven in the lives of others.

We dropped our tears in the ocean, the day you find them is the day we'll stop missing you.

Despite his claims, was not immortal.

A spoiler of dogs.

"He has achieved success who has lived well, laughed often, and loved much."

Your love will never be forgotten.

As a family we are never apart, loving memories keep you alive in our hearts.

When someone you love becomes a memory, the memory becomes a treasure

A life of deeds, not of years

To live in hearts we leave behind is not to die.

A life of beauty, goodness and love.

Your words were kindenss, your deeds were love

Your devotion to your family is our blessing

We are better, having known you.

A life full of years with understanding

Beloved mother, you will rise a beautiful star in paradise.

She added to the art of living

She gave her heart to her family

She graced her years with courage, strength and truth.

He graced his years with courgae, strngth and truth

His courage, his smile, his grace gladdened the hearts of those who have the privilege of loving him

Your patient courage is a beloved memory

He gave his heart to his family

A loving father, tender and kind, what a beautiful memory you left behind

Budded on earth to bloom in heaven

A mother's love, like the sun, cannot go out

Precious memories of a little angel