To Color or Not to Color, That is the Question 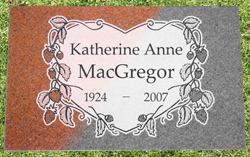 Monument designers have been pondering how to create contrast in carved stone since the first lettering was hand chiseled into natural stone surfaces over 3000 years ago. But the decision to add contrast and color begs the question of "How”? How do we add beautiful and lasting color and contrast to the stone?

Some folks in my company, Quiring Monuments, Inc. in Seattle, WA had a few technical questions about granite coloring/contrasting products, so I decided to go to the source for answers. I called Sam at Cleveland Lithichrome in Fort Scott, Kansas. My dad, David Quiring, Sr., knew Clarence Cleveland, the inventor of Lithichrome products, from his days as a stone carver for Quiring Monument Co. in Wichita, KS back in the 1920’s and spoke highly of him.

Hand chiseled lettering and carving was on the way out in the 1920’s and was being replaced by the new technology of sandblast carving. While chisel carving produced a naturally lightened contrast in granite, sandblasting did not create enough contrast, especially when using lighter colored granites. The carvings almost totally disappeared when they were wet.

Clarence invented Lithichrome Shadow, which could darken sandblasted carvings, and render them visible even on wet days. Lithichrome Hilite seals surface fractures and allowed the lightly sandblasted granite panels to stay bright even when wet. These innovations permitted sandblast carving to become the method of choice among most memorial craftsmen during the 1930’s and 1940’s.

When applying Lithichrome Hilite to a frosted (unpolished) lettering panel it's best to use an Airmite sprayer. We make sure the stone is dry and free of dust then apply the Hilite lightly using two or three coats. The Hilite should be slightly wet when it hits the stone surface. Then, let it dry before the second and third coats are applied.

This process works remarkably well when waterproofing a sandblasted panel. When we want the carved area to be exceptionally white, however, it can get complicated because sometimes the white paint flakes out after a few years. We also have had problems with some of the Litho Stone Paint Colors flaking off after several years.

Sam told me that I should cut the Litho Stone Paint Colors 50/50 with litho solvent for the first light coat. Then use a successive light coat of full strength Stone Paint until you get the color you want. He mentioned that some users will then use a light coat of Litho Clear followed by more full strength Hilite/Color and more Litho Clear. This method tightly bonds the material to the stone and will result in an extremely durable product.

Doing business in the Pacific Northwest, rain is a common weather element. I mentioned that since a flat granite headstone is usually buried in the ground, and since granite normally wicks up moisture from the ground, we occasionally see that even properly applied stone color can begin flaking off the top surface after a bit of freezing weather.

Sam suggested spraying the bottom and sides of the marker with Lithco Hi Polish or Lithco Clear to stop the wicking and minimize the amount moisture that can freeze and pop the Lithichrome off the stone. Generally, upright monuments don’t need to be sealed but some folks use Lithco Clear to seal the bottom of the tablet for extra prevention against wicking.

Keep in mind, while we can add colors and use the best materials available on our granite memorials, nothing we add to the stone is as durable and long-lasting as naturally carved stone. We can't guarantee that colors, sealers and waterproofing won’t weather away, fade, change color or require customer maintenance and or cleaning after a time. But following these techniques will give your monuments the best chance of keeping their color.