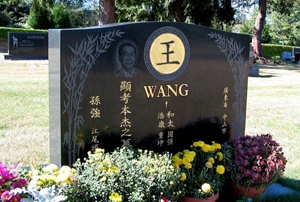 Throughout history, religious art has found its way onto headstones, grave markers, and memorials all around the world. This four-part series takes a close look at the symbolism and meaning behind this use of religious art to commemorate and celebrate the lives of those we love.

Saturated with religion, the continent of Asia features many of the world’s major religious traditions, including Buddhism, Hinduism, Confucianism, Christianity, Taoism, Islam, and others. Since this blog post doesn’t have room to even scratch the surface of the various forms of religious art offered by these traditions (and in honor of Asian-Pacific American Heritage Month), here are some of Asian religious art’s most recognizable symbols and their related meanings.

Dharma Wheel: Also known as the "Wheel of Life,” the dharma wheel is the globally recognized symbol of Buddhism. The dharma wheel features a chariot wheel with eight (or more) spokes and represents "dharma,” the Buddha’s teaching on the path to enlightenment. When used on headstones, grave markers, and memorials, the dharma wheel most likely functions to symbolize the quest for enlightenment.

Lotus Flower: Though a symbol used by many of Asia’s religious traditions, the lotus flower primarily represents beauty and detachment in Hinduism. Rooted in the mud, but floating gracefully on top of the water, these flowers model the Hindu way of life. Used on headstones, grave markers, and memorials, the lotus flower typically signifies the tranquility that results from detaching from mundane things.

Calligraphy: One of the "six arts” historically required of adherents of Confucianism, the act of calligraphy functions to reveal the inner life of the calligrapher. Often used to artistically express the "five virtues” of Confucianism—humanness, righteousness/justice, propriety/etiquette, knowledge, and integrity—calligraphy still plays a major role in the religion today. When used on headstones, grave markers, and memorials, calligraphy most likely expresses one of these five virtues.

Star and Crescent: Though the Quran opposes images or symbols, the star and crescent has come to function as the working symbol of Islam. The history of the symbol is relatively unclear, but it began to be associated with Islam around the time of the Ottoman Empire. Used on headstones, grave markers, and memorials, the star and crescent probably symbolizes the deceased’s identification with Islam.

As mentioned above, Asian religious art features many more symbols than those mentioned here, but these brief explanations will hopefully enable you to understand their meanings when you see these symbols on headstones, grave markers, and memorials, or when you’re wondering how best to commemorate and celebrate the lives of those you love. For more information about Asian-Pacific American Heritage Month, please visit http://asianpacificheritage.gov/about.html.