Exploring Memorial/Monuments Symbols and Their Value 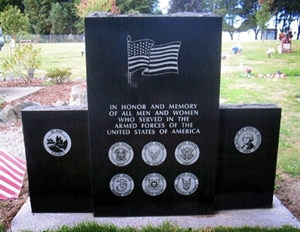 What is the value of a cemetery monument? The American Monument Association, Inc., a group of North American quarry owners and monument manufacturers has promoted "The Memorial Ideal” for more than 100 years. It reads: "A monument built of enduring granite or marble, symbolic in design and reverent in purpose, resting in surroundings of peace and beauty, a tribute of respect and honor to the dead, a constant source of inspiration to the living.”

I’d like you to consider the phrase "symbolic in design” from "The Memorial Ideal” above since I believe that is the area where much of the value of memorialization is currently centered. Most memorialists like to think in terms of Emblems, Symbols and Graphic Elements when trying to determine the best perspective for a headstone design. There are subtle differences in the terms and they bear a bit of scrutiny.

An emblem is a design that can be used to represent a particular idea. It visually solidifies the terms of an abstraction, for example, a virtue or a connection to an ideal. An emblem can be an object or it can represent an object. An Eagle Scout emblem suggests all that it takes for a young man to achieve mastery of being a Boy Scout and a Marine Corps emblem represents all that it takes to become a part of the Marine Corp history.

A graphic element is an artistic representation that can create an ambiance or convey a complicated idea or feeling. A hand-etched portrait can be reflective of a particular person at a special time. A reproduction of a family art object or of a special holiday celebration will speak volumes to future generations. A meticulously sculpted representation of Dad’s favorite 67 Chevrolet brings a deeply felt emotion to those who knew him.

It is important to understand also that the design elements above along with the name, dates and an appropriate epitaph must be graphically arranged with different weights of type, proper spacing and placements that facilitate the natural movement of the eye. Using these tools, modern memorial designers have been able to create meaningful stories in stone that will endure with value to future generations.