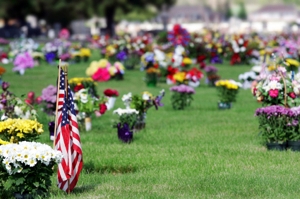 For many people, Memorial Day is an exciting holiday. It marks the beginning of summer and workers get a 3-day weekend. It’s the start of boating, camping, and hiking seasons and school is almost over. But how many of us remember the original purpose of this holiday?

Memorial Day was first observed on May 30th 1868 as officially proclaimed by General John Logan, national commander of the Grand Army of the Republic. Congress only changed it to the last Monday in May in 1971. It began as a way to remember Civil War veterans in the mid 1800’s and by the beginning of the 20th century had morphed into the day for visiting graves of all deceased loved ones.

As a child in the early 1950’s I watched my Dad gearing up Quiring Monuments for "Decoration Day” as early as March. Everything came to a crescendo on May 30th, and if his work wasn’t done the day before, Dad finished up the last of his installations early on Memorial Day morning before anyone else visited the cemetery. I learned a lot about commitment riding along with him on those last minute runs.

The epitaph on his memorial, "But I have promises to keep, And miles to go before I sleep,” from the Robert Frost poem Stopping By Woods on a Snowy Evening was an unspoken commitment he made to his customers. It was important to him that each client he served had a fitting monument standing over the grave where Memorial Day flowers would be placed.

It was a solemn occasion, not only for recognition of the young men and women who had recently given their lives during WWII, but after a long dismal Seattle winter everyone wanted their loved one’s monument ready to decorate with flowers and other mementos. Pride and respect were the operative words and everyone came out to their cemetery with bouquets of flowers, jugs of water and hand trimmers to spruce up the family plot.

Some of you may even remember buying red poppies from Veterans of Foreign Wars members to wear in the weeks before Memorial Day. This custom was in reference to the 1915 poem In Flanders Fields "We cherish too, the Poppy red that grows on fields where valor led” and if you didn’t have the poppy on your lapel you felt a bit guilty. VFW members sold these red fabric flowers to support servicemen and their families who were in need.

The cemeteries looked so beautiful in those good old Seattle days with the grounds mowed, trimmed and pruned to perfection. They were embellished with handpicked bouquets of azaleas, rhododendrons, tulips, daffodils and chrysanthemums in front of almost every monument. There were so many cars that some cemeteries had to create one-way streets and carefully manage parking.

While most folks haven’t forgotten about Memorial Day things have definitely changed in the last 60 years or so. William Gladstone, former Prime Minister of England, said, "Show me the manner in which a nation or a community cares for its dead and I will measure with mathematical exactness the tender mercies of its people, their respect for the law of the land, and their loyalty to high ideals.”

This Memorial Day weekend, keep in mind Mr. Gladstone’s words and honor a lost loved one.