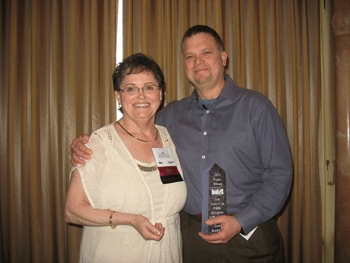 We at Quiring Monuments would like to take a moment to let you know that we won an important industry award last month. We’re excited to share this news with you because we deeply believe in what we do each day and we’re excited that an industry-leading organization has recognized our hard work.

At a conference in San Diego, California in late February of this year, we were one of two winners of the Monument Builders of North America (MBNA) 2011 Aspire to Success Contest, held in conjunction with the California Monument Association (CMA) and the Pacific Northwest Monument Builders Association (PNMBA). MBNA’s Aspire Awards are given to monument building companies in recognition of specialized marketing and public relations campaigns that gain favorable attention throughout the year and, in turn, draw attention to the greater memorial industry.

We received an MBNA Aspire Award this year due to our creation and implementation of technological additions to the memorial industry. Using Quick Response Code (QR Code) technology, we developed something called Living Headstones®, a way to share and access information about loved ones through the Internet. In effect, it was our attempt to use the best of technology to breathe fresh air into the memorial process.

News of this quickly spread, and the local ABC television affiliate, the Canadian Broadcasting Corporation (CBC), National Public Radio (NPR), and even the Times of India picked up our story! Thankfully, this coverage has not only brought attention and business to Quiring Monuments, but it helped generate greater dialogue among monument building companies, as well as reinvigorate the industry itself.

"We at Quiring Monuments are honored to be recognized by the MBNA in this way. As always, we remain committed to combining technology with traditional forms of memorialization in order to build beautiful, lasting memorials and to increase the awareness in each new generation of the need to preserve the memories of those we love.” –Jon Reece, General Manager

Thank you for allowing us to share this exciting news, and thank you for your support of the work we do here at Quiring Monuments!