9 of the Most Famous and Historic Monuments 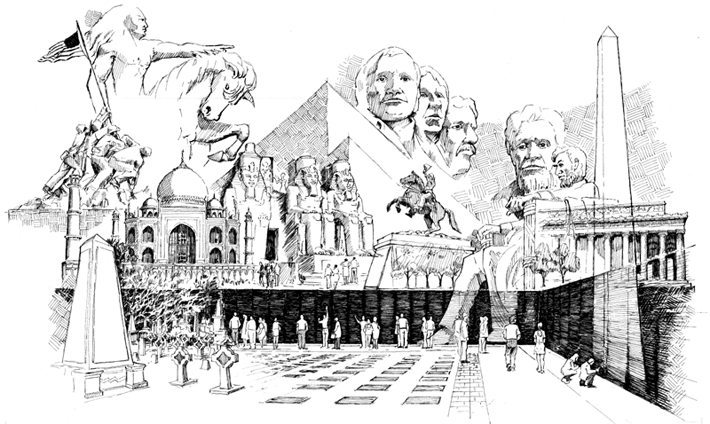 During the course of your life, you’ve most likely visited a handful of monuments. Some of these monuments were probably small, recognizing the life of a solitary individual. Others might have been large, aiming to commemorate a significant moment in history or the combined efforts of a group of people for an important cause. Regardless of their size, these monuments no doubt moved you to pause and remember someone or something worth remembering.

Here’s a list of some of the largest and most recognizable monuments in the world, accompanied by a brief description of the story behind each.

A mountain monument, the Crazy Horse Memorial commemorates Crazy Horse, a Native American war leader of the Oglala Lakota tribe who lived from 1840 to 1877. Though work on the monument began in 1948 and though it is far from completion, when completed, it may be the world’s largest sculpture.

Based on the iconic photo "Raising the Flag on Iwo Jima,” the Marine Corps War Memorial depicts the six men who raised the American flag during the Battle of Iwo Jima. This military memorial is dedicated to all fallen United States Marine Corps officers and stands just outside Arlington National Cemetery.

A majestic, white marble mausoleum, the Taj Mahal was constructed by Mughal emperor Shah Jahan in memory of his third wife, Mumtaz Mahal. Now a world-renowned tourist site, the Taj Mahal is widely considered the "jewel of Muslim art in India” and features a combination of Persian, Turkish, and Indian architectural influences.

Over 130 ancient pyramid-shaped structures have been found scattered throughout Egypt. Most of these pyramids were used as tombs for the country’s pharaohs during the Old and Middle Kingdom periods. Some of the most famous of these pyramids are located in Giza, near the outskirts of Cairo.

Carved into the granite face of Mount Rushmore, the Mount Rushmore National Memorial features 60-foot-high sculptures of the faces of some of the United States of America’s most famous presidents: George Washington, Thomas Jefferson, Theodore Roosevelt, and Abraham Lincoln. Designed by Danish-American sculptor Gutzon Borglum, the memorial was officially dedicated in 1991.

Located in the center of Lafayette Park in Washington, D.C., this statue of Andrew Jackson commemorates Jackson’s efforts in the Battle of New Orleans. Sculpted by Clark Mill and cast in ten separate pieces, the entire statue weighs a total of 15 tons and was dedicated in 1853, the first statue in the park.

Constructed in the form of a Greek Doric temple, the Lincoln Memorial honors Abraham Lincoln, the 16th president of the United States of America, and features inscriptions of two of his most famous speeches. The statue of Lincoln was sculpted by Daniel Chester French and sits in the memorial’s central hall.

Standing over 555 tall at the west end of the National Mall, the Washington Monument is an obelisk made of marble, granite, and bluestone gnesiss commemorating George Washington, the United States of America’s first president. Construction began in 1848, took a hiatus during the Civil War, and was completed in 1884.

Honoring United States military service members who died or went missing during the Vietnam War, the Vietnam Veterans Memorial Wall is made of two gabbro walls sunk into the ground. The walls have a reflective quality, and visitors can see themselves and read the names of the listed service members at the same time.