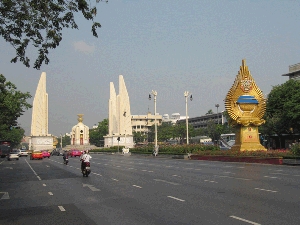 I left Seattle at 1:00 am on a half-full plane headed for Taipei, Taiwan. After a 13 ½ hour flight to get to Taipei, I met up with my travelling partner, John Provines who is the owner of VJ Memorials in Chino, CA. From there we caught a 4-hour flight to Bangkok, Thailand. After making trips to Asia several years in a row, I’ve learned to leave at night, maximizing my sleep on the flight while arriving in Thailand at noon. I never get jet-lag going over there. Unfortunately, that isn’t true for returning to the US.

John and I arrived at our hotel and, as usual, chatted up the concierge to learn where we could find the local cemeteries, funeral homes or monument carvers. All we got were puzzled looks from the folks at the hotel. Yes, there were some cemeteries but they were for Chinese immigrants or Christians. We eventually found a Chinese cemetery some distance outside of Bangkok but try as we might we never did find a Christian cemetery.

It turns out that most Thais are cremated and have their ashes comingled in concrete structures near Buddhist Temples, like in the picture below. There were about 10 of these large cremation containers scattered around this temple.

Monks do the cremating free of charge for persons of small means, though they do ask for a donation. Wealthy people can pay over 30,000 Baht ($1000.00) for the same service. Note the white smoke stack coming from the crematorium inside the temple in the photo below.

In July of 2011, Princess Bejaratana Rajasuda Sirisobhabannavadi, a cousin of King Bhumibol, passed away. In her honor, the King was building a crematorium on the royal cremation grounds next to the palace. With the last royal cremation in 1986, this was big news. Luckily, we were able to wander our way into the construction site. We managed to take several photos before being unceremoniously ushered off the grounds.

Since our trip, we’ve learned that the princess was cremated in a ceremony on April 9, 2012 and her ashes were placed in a golden urn. King Bhumibol Adulyadej and his wife Queen Sirikit presided over the ceremonial cremation. In the photo below, you can see workmen lifting a large wooden fascia arch onto the front of the building. A small crane could have done it much more safely! (Click to view completed picture of the crematorium.)

After visiting this beautiful memorial, John and I continued our search for the other cemeteries we had heard about. But we took some interesting detours. Our first stop, along with tourists from all over the world, was a short walk to the Grand Palace grounds where we took a quick tour.

In the past, there have been protests that shut down access to certain areas of the city. Although we saw no violence on this trip, that may have been due to the ample military presence throughout the city.

We also toured several other landmarks in Bangkok, including a Buddhist Shrine where there were several monks teaching children in front of a large golden Buddha.  See the large display of Thai Baht notes in the foreground?

Bangkok is filled with beautiful artwork, including many impressive gates throughout the city.  The one in the picture below features elephants, which are commonly used to represent Thailand as they symbolize strength, wisdom, and victory.

Shrines, similar to the one below, dedicated to King Bhumibol Adulyadej and Queen Sirikit are everywhere and all persons we talked with love the King and Queen (although the King’s playboy son was thoroughly disliked).

While Thailand is (justifiably) proud of the fact that they have never been colonized, the path to democracy has been rocky. The impressive Thai Monument to Democracy was created in 1939 as a symbol of the adoption of democracy and liberty in Thailand. Since then it has been used as a rallying point for multiple democracy activists.  (It’s the white sculptures on the left.)

The Thailand Victory Monument was built to commemorate Thailand's victory over French colonialists in Indochina. This was a brief and relatively bloodless war that led to the country regaining disputed land on its borders with Indochina. The monument is impressive and very well done.

Finally, about 100 miles South of Bangkok we found an impressive Chinese cemetery. The monuments were huge and made mostly of concrete with colored inlays. These memorials were created in the mainland Chinese style, which features a monument tablet in front of a large burial mound.

Only the center tablet of the memorial is made of granite.  The mosaic inlays on the walls leading to the center are very detailed and feature symbolism unique to each family.

The photos below are of the largest memorial in this cemetery. It is for a single Chinese woman who was iconic in the community. The first photo shows the central tablet which is made of gray granite and is embellished with gold leaf.

As you can see in this photo, there are 14 mosaics on panels leading to the central tablet.  In addition to that detailing, the large apron in front of the memorial is embellished with over 50 unique floral designs.

While the memorials were hard to find, they were well worth the effort.  John and I were able to see several different styles of memorialization, all beautiful in their own unique way.

Stay tuned for more pictures from the 2012 Thailand and China tour.